Plans for a new, AUD$50 million six-star luxury hotel and day spa at Seppeltsfield winery in the Barossa Valley near Adelaide, South Australia have been lodged with Light Council.

If successful, the 12-storey ‘Oscar Seppeltsfield’ hotel will have around 70 rooms, including suites and penthouses, with a private balcony for every room, and open in 2022.

The project is being funded and driven by a group of South Australian business leaders who say the new accommodation offering would attract new markets to the region and drive growth in domestic and international visitor economy.

“The Barossa is famous for its wine, food, and spectacular sights, but what it needs is an iconic luxury hotel to cater to local and international guests that visit the region,” says Oscar Seppeltsfield spokesman, Toby Yap. “We are thrilled to be bringing this landmark project to one of the greatest wine regions in the world.

“With over 897,000-day trips to the Barossa in 2019, Oscar Seppeltsfield will be a place where people can stay longer, immerse, indulge and relax.”

Yap says there will be a sky bar on the top level with 360-degree sweeping views of the Barossa, while the ground floor will have a wellness day spa including a private entry to a relaxation space and infinity pool.

He says the hotel will also offer a world-class restaurant, private dining room and boardroom.

“Oscar will complete the grand vision of our tourism master plan for Seppeltsfield to become the most desirable epicurean destination for tourists worldwide,” says Seppeltsfield owner and Executive Chairman Warren Randall. “We wanted to create a national icon for South Australia – a Sydney Opera House for the Barossa.

“The hotel will be positioned gently in the middle of the Great Terraced Vineyard, surrounded by century old bush vines, an amazingly tranquil location and a short walking distance to the world-class Seppeltsfield tourism village. 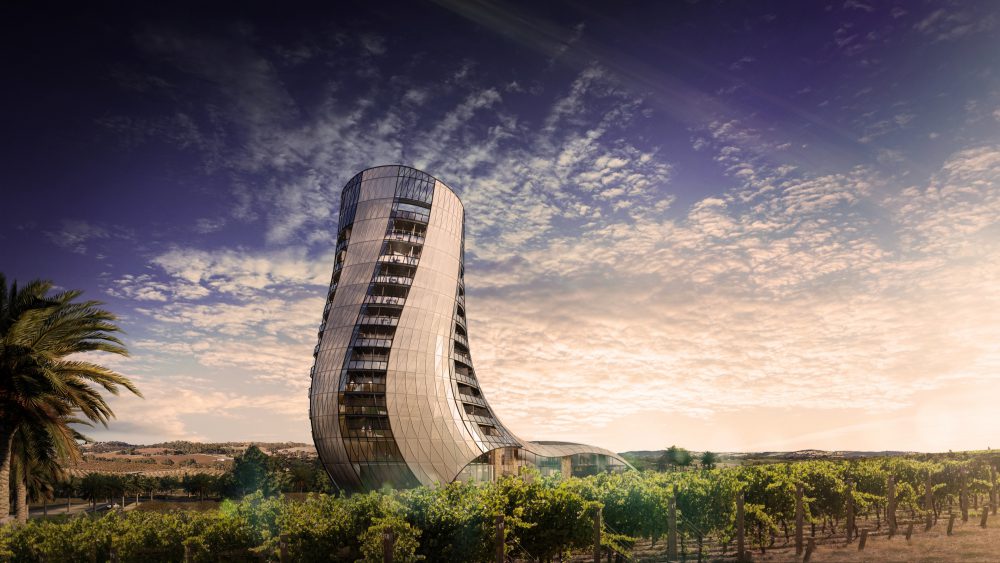 Terry Boxall, Head Architect of Intro Architecture, designed the hotel taking inspiration from the history of Seppeltsfield winery and the wine barrels in the Centennial Cellar. The hotel has been named in honour of the innovative visionary Oscar Benno Seppelt who revolutionised the Australian wine industry.

According to the developers, a gap in the market place was identified from research commissioned by the South Australian Tourism Commission with only 28 accommodation options out of 161 rated at 4-stars or above, leaving high-end visitors with little options if they wish to stay.

Direct tourism expenditure as a result of the hotel is expected to be AUD$19 million per year or AUD$86 million over the first five years. Tourism visitor numbers are estimated at 147,166 over first five years with the hotel completion date set for early 2022.

The project has been welcomed by South Australian Premier, Steven Marshall.

“I am very excited about the potential for tourism in the Barossa and across regional South Australia,” he says. “This type of investment in the region will be great.”

The developers say it is anticipated that the construction of an iconic building “will drive visitation in the broader region and act as a catalyst for new development activity”.