Sir Richard Branson and Virgin Australia have created Australia’s first ever giant sushi train on a baggage carousel at Brisbane Airport to celebrate the approval of the airline’s new flights to Japan.

Founder of Virgin Group, Sir Richard Branson, made a grand entrance with traditional Japanese drummers by his side and giant chopsticks in each hand, ready to dine at the giant sushi train.

Virgin Australia created the buzz at Brisbane Airport to celebrate its new daily service between Brisbane and Haneda, Tokyo which will commence from 29 March 2020 and will connect the two airports for the very first time.

Sir Richard Branson said: “I’m thrilled Virgin Australia will fly from Brisbane to Japan from March next year. Tokyo is a wonderful destination and it’s about time travellers between these two cities got to experience the fantastic Virgin Australia awarding winning service. 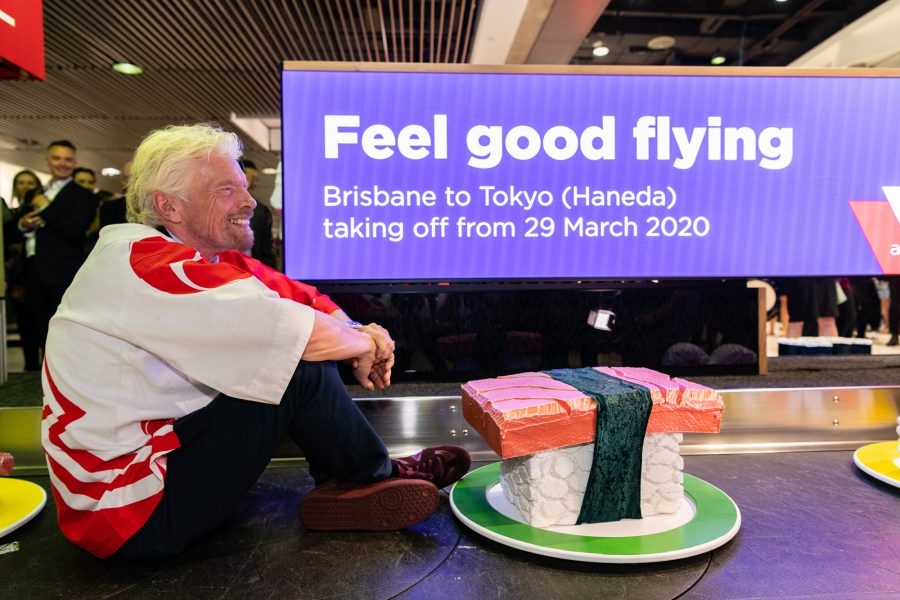 ‘I’ve been lucky enough to visit Japan many times and I know Virgin Australia is going to be welcomed there with open arms. Aussie travellers are also in for a real treat although I don’t think giant sushi has made it onto the onboard menu just yet!”

Virgin Australia Group Managing Director and CEO Paul Scurrah said: ‘I’m delighted to be announcing our new flights to Japan and bringing our competitive airfares and award-winning service to this market for the very first time. This announcement is a real milestone both for Virgin Australia and Queensland, as we become the first airline to connect Brisbane to the closest and most convenient airport in Tokyo.

“We’re pleased to have Virgin Group Founder, Sir Richard Branson here today (Nov 14) helping us celebrate one of the first of many Virgin events we have planned for this truly exciting announcement for Virgin Australia.”

Virgin Australia flights between Haneda and Brisbane will be on sale next month.