Marriott International to ban plastic straws from over 6,500 hotels worldwide

Marriott International has announced that it has adopted a plan to remove disposable plastic straws and plastic stirrers from its more than 6,500 properties across 30 brands around the world.

Once fully implemented in one year, the company could eliminate the use of more than 1 billion plastic straws per year and about a quarter billion stirrers.

A single plastic straw – which might be used for about 15 minutes – will never fully decompose.

“We are proud to be among the first large U.S. companies to announce that we’re eliminating plastic straws in our properties worldwide,” said Arne Sorenson, President and Chief Executive Officer of Marriott International.

“Removing plastic straws is one of the simplest ways our guests can contribute to plastic reduction when staying with us – something they are increasingly concerned about and are already doing in their own homes.

“We are committed to operating responsibly and – with over one million guests staying with us every night – we think this is a powerful step forward to reducing our reliance on plastics.”

Marriott’s plastic straw initiative is the latest change the hospitality company is making to enhance the sustainability of its operations and reduce plastic consumption.

Earlier this year, Marriott began replacing small toiletry bottles in the guest bathrooms of about 450 select-service hotels with larger, in-shower dispensers that distribute more product for guests to use, reducing waste.

The new toiletry dispensers are expected to be in place at more than 1,500 hotels in North America by the end of this year, which would enable Marriott to eliminate more than 35 million small plastic toiletry bottles annually that typically go to landfills.

These initiatives build on Marriott International’s commitment to reducing its environmental impact. Last year, the company set its most ambitious sustainability and social impact goals ever that call for reducing landfill waste by 45 percent and responsibly sourcing its top 10 product purchase categories by 2025.

These goals and other sustainability programs help reduce our environmental footprint and are part of the company’s Serve 360: Doing Good in Every Direction initiative that addresses social, environmental, and economic issues. 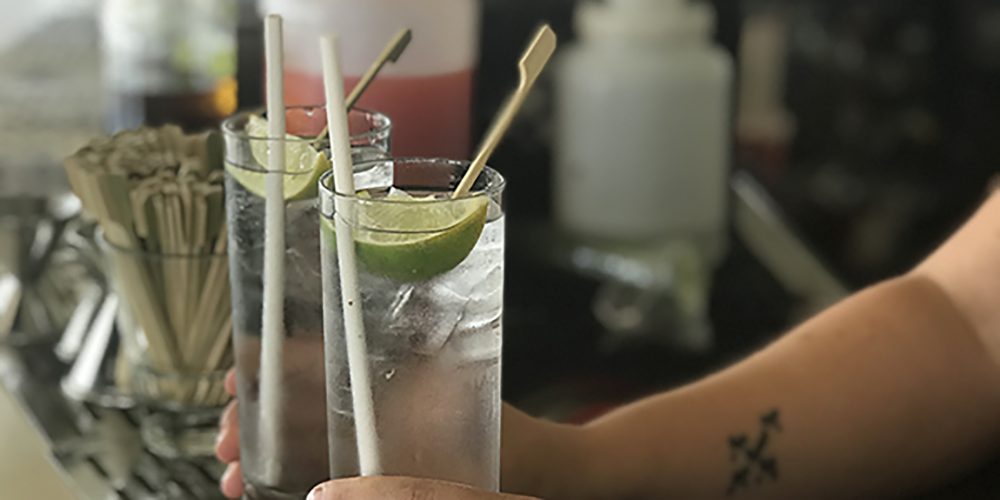 In February, more than 60 hotels in the United Kingdom eliminated plastic straws and began offering consumers alternate straws upon request.

Many individual properties – ranging from urban boutique hotels to oceanfront resorts – have also been on the forefront of this initiative including:

–The Pancras Renaissance Hotel London was among the 60 U.K. hotels that in February removed plastic straws. Since then, the hotel has received positive feedback from guests and has halved the number of straws used at the property.

–The Los Sueños Marriott Ocean & Golf Resort in Costa Rica eliminated the use of plastic straws earlier this year.

–The JW Marriott Marco Island Beach Resort in March became one of the first hotels on Southwest Florida’s Paradise Coast to eliminate plastic straws, eliminating about 65,000 straws per month.

–The Four Points by Sheraton Brisbane in June removed plastic straws and stirrers and adopted alternate products throughout the hotel including at Sazerac, the hotel’s 30th floor bar – and the tallest bar in Brisbane.

–The Sheraton Maui Resort & Spa in August became Hawaii’s first resort to remove plastic straws from its restaurants, luaus and other venues, eliminating about 30,000 plastic straws per month.

“Our guests come to stay with us to enjoy Maui’s beautiful environment and incredible marine life, so they’re as eager as we are to reduce harmful pollution,” said Sheraton Maui Resort and Spa General Manager Tetsuji Yamazaki.

“By eliminating plastic straws, we have been able to create a substantive dialogue with our guests about the importance of protecting the ocean and endangered animals like the honu (green sea turtle).”

In conjunction with its plastic straw initiative announcement, the company is also eliminating plastic straws from its corporate headquarters.

As part of the initiative, hotels will offer alternative straws upon request.