Sitting in an infinity pool with a Mai Tai in hand, watching North Pacific Humpback Whales breach just several hundred meters away is one of the most amazing experiences to be had at any hotel in the world, and when you’re staying at the Four Seasons Resort Maui at Wailea, that’s exactly what you get.

Even when the whales aren’t visiting the Wailea coastline in their thousands each year, the view from the pool over the West Maui coastline is one of the best on this island.

Being in the water is a key theme at the property, which re-opens on November 20 – the adult’s only infinity pool is one of several pools at the resort (there’s also the main fountain pool and a children’s pool), alongside the beach at the front of the property.

At the Four Seasons Resort Maui at Wailea, there are 383 rooms, including 75 suites, with many facing the ocean and you want to book an ocean view prime room that looks west to enjoy the sunsets from the balcony. Inside, you’ll find TVs with device mirroring so you can watch your own content, large bathrooms with two sinks plus a deep soaking bath and a shower, and a signature Four Seasons king bed or two queen beds.

There are several bars and restaurants at the resort alongside the popular Beachwalk Café for a macchiato, house-made gelatos or a wrap. There’s also live music in the lobby lounge daily.

The Four Seasons Resort Maui at Wailea has also launched one of the world’s most unique dining experiences – a luau feast on your lanai (balcony) complete with Mai Tais, Polynesian wood carvings, and Hawaiian musicians and hula dancers on request. 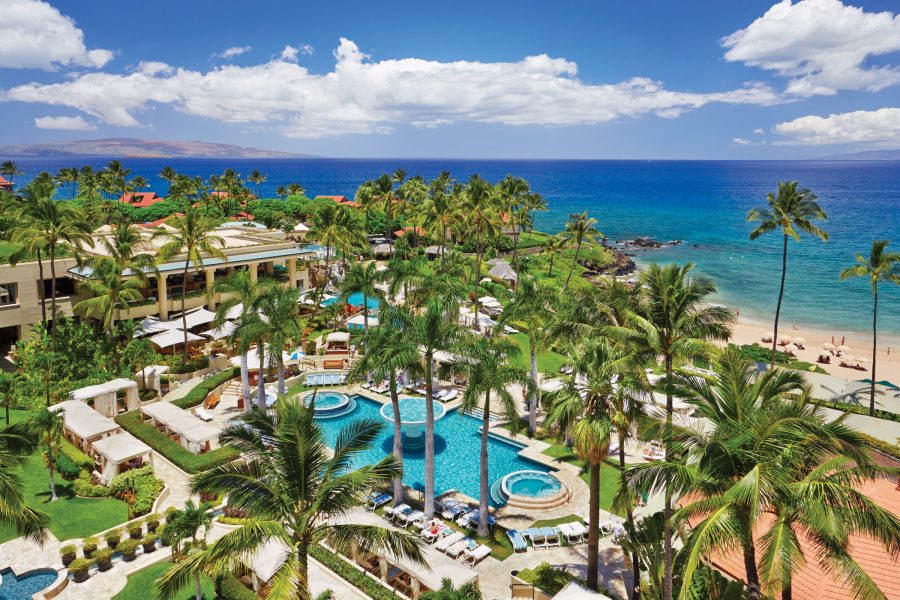 Priced at USD$180 for two, the feast includes dishes such as ahi poke, lomi-lomi salmon kimchee tako poke and poi, coconut milk and lime ceviche, kalua pork and fish laulau, huli huli chicken breast and a coconut haupia and pineapple upside-down cake (and order some ice cream on the side).

Usually, a luau is saved for an event for the masses, but having a feast set up in your room complete with Mai Tais and hula dancers is quite the experience in itself.

Spa treatments are available in oceanside huts (book a Hawaiian Lomi-Lomi massage) for up to two people at once, while poolside massages are also available throughout the day. Fitness classes are also held daily and recently stand-up paddleboarding yoga was added to the list.