AirAsia has this week operated its inaugural flight between Bangkok, Thailand and Brisbane, Australia.

The new route marks AirAsia’s first time operating out of Brisbane Airport and is expected to carry up to 150,000 people between the two cities over the next year.

AirAsia X Group CEO, Nadda Buranasiri, said: “We are delighted to have a new home in Queensland, adding Brisbane to our Queensland ports after we commenced operating flights from the Gold Coast in 2007. This direct service between Bangkok and Brisbane strengthens our connections into Australia and adds to our extensive network of more than 140 destinations worldwide.

“Australia remains a key market for AirAsia and with new aircraft on order we can continue to review potential future expansion opportunities where we witness the right levels of demand for great value, medium to long haul air travel.

“In addition to attracting visitors to Brisbane, the new route will give locals a direct link to the bustling street markets, thriving nightlife and iconic temples of Thailand’s capital city as well as the stunning islands and beaches within easy reach of Bangkok.

“We look forward to working with Brisbane Airport, the Queensland government and the local tourism industry to make these new services a success,” Buranasiri said.

Brisbane Airport Corporation CEO, Gert-Jan de Graaff, said there is nothing more exciting for an airport than the arrival of a new airline and the launch of new services.

“Committing valuable resources to establish a new route to a new destination is a major commitment for any airline and we are very happy AirAsia has recognised the huge potential of the market between Thailand and Brisbane and is backing that potential,” he said.

“Today’s launch is the start of a very exciting and successful partnership with AirAsia and we have no doubt these direct flights, combined with AirAsia’s renowned low fares and quality product and services, will be extremely popular with travellers in both directions.” 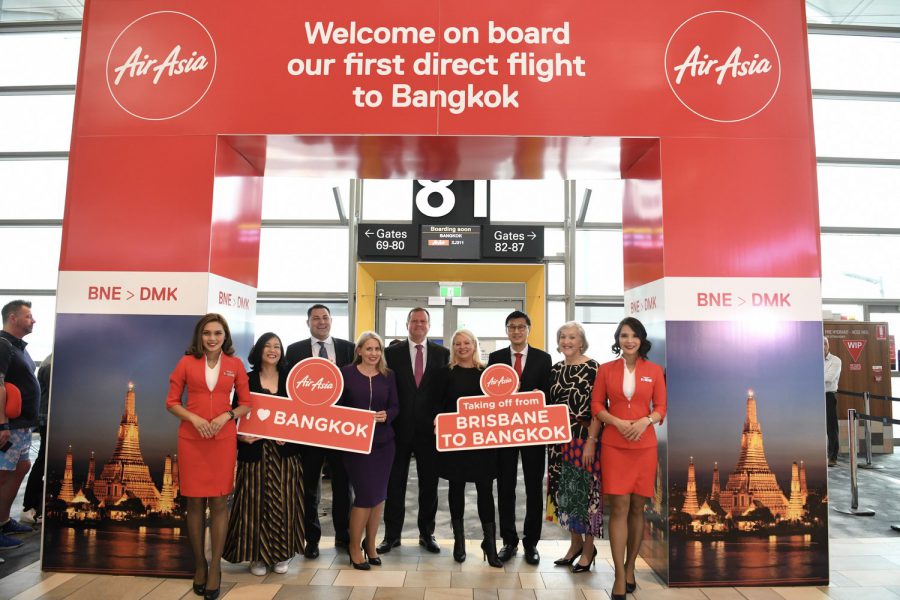 Queensland Minister for Tourism Industry Development Kate Jones said the new service would inject up to $156 million into the Queensland economy over the next three years.

“This is a great day for Queensland as we welcome yet another new inbound service to the State,” she said.

“Asia is a key market for Queensland’s tourism industry and this new service will bring more than 235,000 inbound seats to Brisbane over the next three years, providing a $156 million boost to the state’s economy and supporting 660 jobs.

“The Queensland Government supports new services through the Attracting Aviation Investment Fund because we know providing travellers with direct access to the state is key to growing our tourism industry.

Direct fares from Brisbane to Bangkok start at AUD$199.